It’s not every day that you come in contact with a real-life Barbie. Upper School students were paid a virtual visit on Monday by tennis great Billie Jean King, who was recently honored with a doll in her likeness for the ”Barbie Inspiring Women” series. A longtime human equality activist, King discussed everything from creating a platform to make a difference to the birth of women’s tennis and her lengthy career as the number one women’s tennis player in the world to equal pay for women.

Students listened intently as King spoke on the importance of studying history, the challenges each decade presents, the current political climate, and the need to learn from your mistakes and pick yourself up after setbacks. 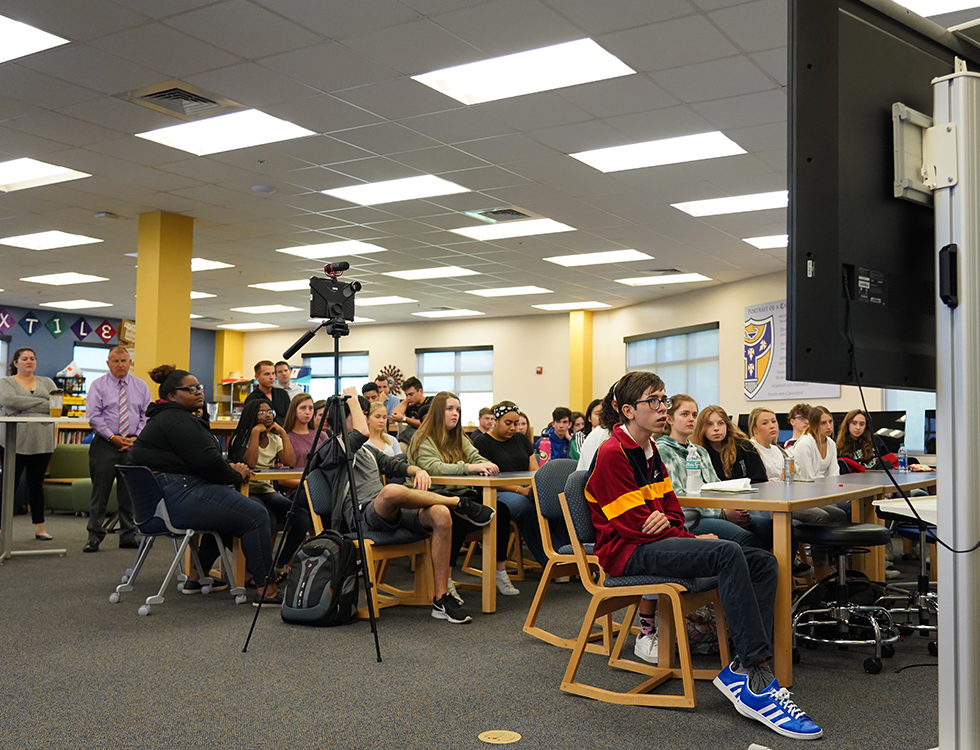 "Everything that happens to you in life is feedback,” King said. “You learn from winning, you learn from losing. You learn from all kinds of setbacks. Keep going, correct it, and ask for help.”

Junior Jack Milkovich set up the video conference with King through his personal relationship with her. He calls her “Busy Billie” and she regards him as one of her “favorite people in the whole world.” She thanked Jack for asking her to speak with his classmates. 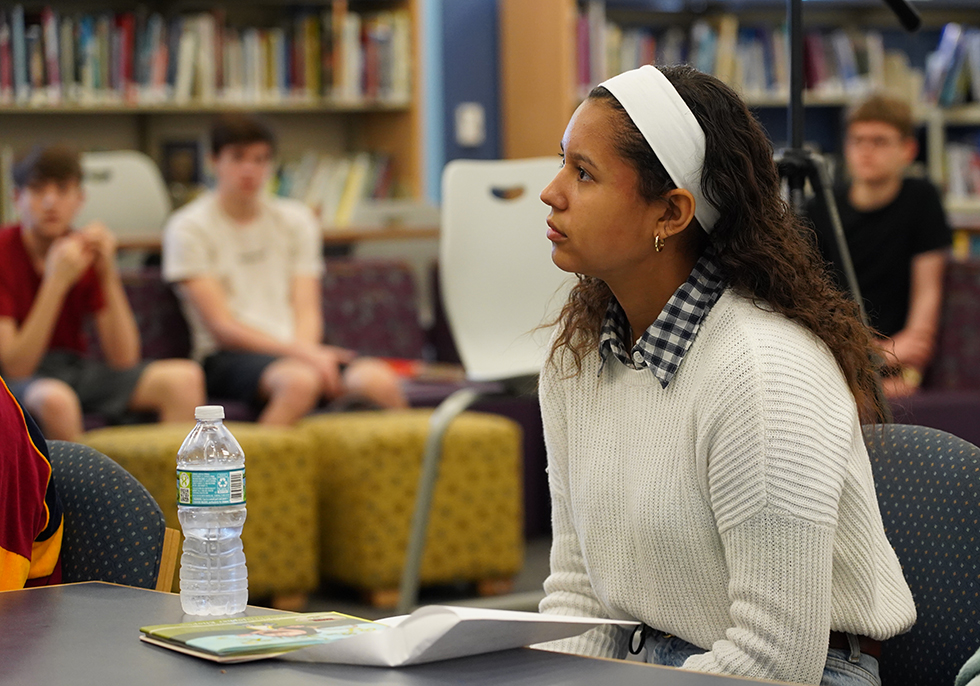 Sophomore Nia Tomalin took a minute to compose herself before proceeding to the podium to ask a question, admitting that King is “like her idol.” Referring to when King famously defeated Bobby Riggs in the Battle of the Sexes exhibition tennis match in front of 90 million TV viewers, Tomalin asked King if she hadn’t had that opportunity, what else would she have done to promote women’s rights.

“I knew since I was 13-years old that I would fight for equality for the rest of my life,” King told Tomalin and her classmates. “And I was really lucky because tennis is a global sport and it would give me a platform. And that’s exactly what it's done.”

If she hadn’t done that, she “probably would have tried to become president of the United States,” she said.

Tomalin said hearing and seeing King on the screen in her classroom was something she will never forget. 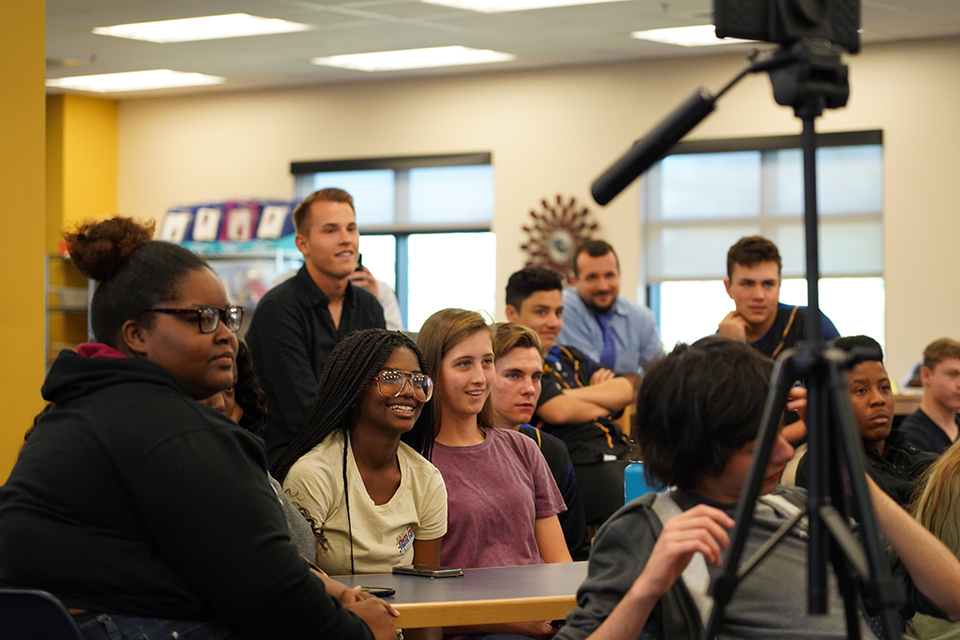 "Getting a chance to speak with one of my biggest inspirations was life-changing. Her stories of how she overcame adversity on both the tennis court and in life were not only motivational but also humbling.”

The opportunity to speak with King originated from Dr. Glenn Kolyer’s Contemporary History class. Dr. Kolyer asked King about the key life skills that contributed to her level of success in tennis but also translated into success in life.

"Tennis has taught me life,” King said, adding that the time management skills she learned while playing a professional sport were invaluable. “What sports teach you is resiliency, they teach you to have discipline.”

Speaking directly to the boys in the room, King addressed the importance of a father’s influence on his daughters. She recalled how her own father did not ever differentiate between her and her brother’s sports careers.

"Sports aren’t just for boys. Girls, boys, all of you deserve to have the dream,” King said. “We have a long way to go to get to that point.”

King also discussed how she and eight other professional women’s tennis players, called “The Original Nine” got together to fight for equality in women’s sports. 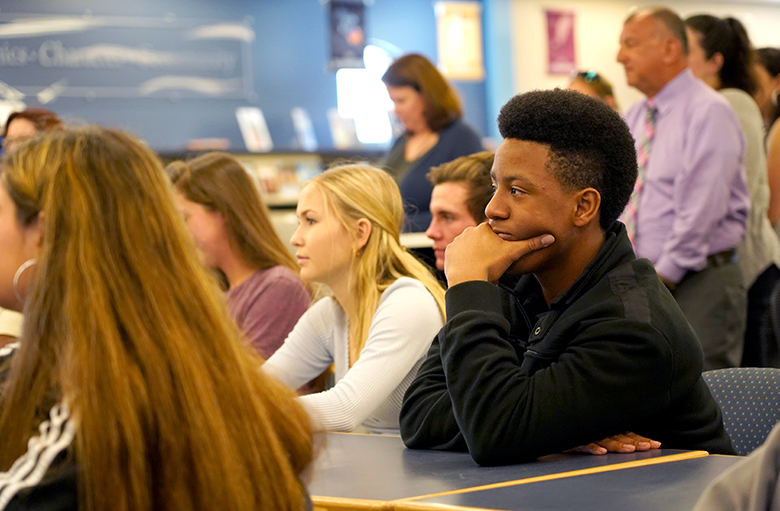 “There were three things that were really important to us: that any girl born in the world [...] would have a place to compete; number two, that she would be appreciated for her accomplishments and not only her looks; and, number three, to be able to make a living. And it worked. [...] That just shows you what you can do if you stick together, and really are willing to put yourself on the line for something you believe in.”

The Original Nine preceded the passage of Title IX, a federal civil rights law that protects people from discrimination based on sex, by two years.

Kolyer reflected on King’s discussion: “History is something I hold sacred, as someone would hold pillars of their faith. I always want my students to feel as close as possible to the historical context of what they are learning in my class, whether it be ancient or contemporary. Opportunities like this one, which don't come often, help students grasp the zeitgeist of the times which they are studying and let them place their hands on the past in a concrete way. All of this was possible because of one student. Jack. I think he deserves full credit. It was his initiative that made this possible. Thank you, Jack!”

Among the participants listening in on Monday was Canterbury’s Director of Character Education, Jeff Donnelly. “Ms. King made a lot of wonderful statements, but one that really was important to me was when she talked about tennis being the platform she chose to enact change. Tennis was something she had a talent for, and she encouraged our students to each find their individual thing that could be a platform by which they could advance causes that were important to them. The message speaks directly to the topic of advocacy, which is our LEADS focus this term.”

Jeff and his team of fellow teachers make it their mission to help students find their voice through character development, service work, and advocacy. King’s message spoke straight to the heart of Canterbury’s mission.