Picture this: You send your child off to school knowing that they have a big day ahead of them. Whether it is a field trip or a special event, you know they are making memories that day. You think about them throughout the day and wonder what they are experiencing. You are eager to see them and hear all about their day. "So, how was your day?" you ask. Their answer is beautifully simple and completely withholding: "Fine."

Fifth-grader Caitlin Williams recounts her class field trip to the Florida Museum of Natural History and Blue Springs State Park. She very eloquently paints a picture of her thoughts and impressions from the day taking in her surroundings and experiences. 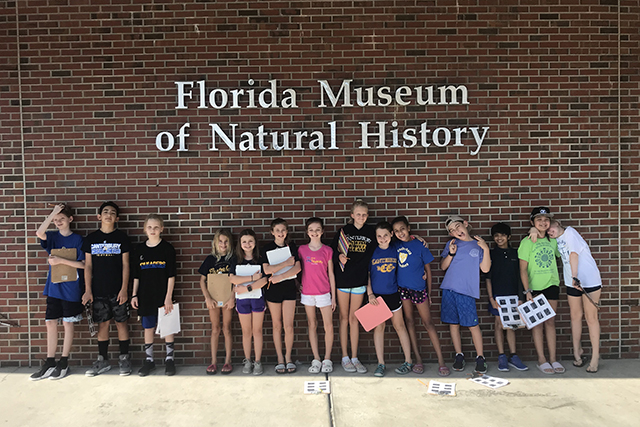 Butterflies. Rows and rows of butterflies...each one as delicate as the next. Three whole stories dedicated to butterflies. No wonder the museum was so big! A simple display showed how they pinned and preserved butterflies. Looking at the rows of preserved butterflies, I wondered how long all that pinning had taken. Our guide explained to us that, a lepidopterist is a scientist who studies butterflies.
“Now you try saying that.” The guide said, chuckling.
“Lep-id-op-ter-ist!” the class slowly pronounced the word.
“Wonderful!” said the guide, smiling. She led us over to a large window. “Now, if any of you ever decide you want to be a lepidopterist later in life, this is what your workspace might look like.” the guide said.
Through the window, I could see beakers, refrigerators, needles, vials, and plenty of other scientific tools. Although I was impressed with the pinned butterflies, I was dying to see some live ones. Then, the guide led us over to a corkboard with pinned moths on it. A label at the top read, Largest to Smallest. Three little moths, about the size of a small pencil eraser, were carefully pinned to the board. A huge moth, bigger than my fist was pinned up next to them. “I’m honestly not sure how they caught them,” said the guide, pointing at tiny moths. “They’re about the size of pocket lint!”
We walked down the rest of the hallway, till we reached a small, closed-off room. Inside, about twenty small butterflies fluttered around a small cage, multiple cocoons hung from sticky, white shelves, and four big moths fluttered around the window.
“It’s moving!” shrieked one of my classmates.
“Well, of course, the moths are moving!” said the guide. “They’re alive!” The class laughed.  “These butterflies are going to be released into the Butterfly Rainforest at 2:00 today,” she said, pointing to the butterflies in the cage. “And that’s where we’re headed now!” The class hurriedly followed after her as she led us to a man.
“Can you guys follow some easy rules?” the man asked “YES!!” said the class, getting very impatient. “First of all, don’t climb on anything, don't touch the butterflies, and don't run.” the man said, explaining the rules.
“Okay,” we responded. 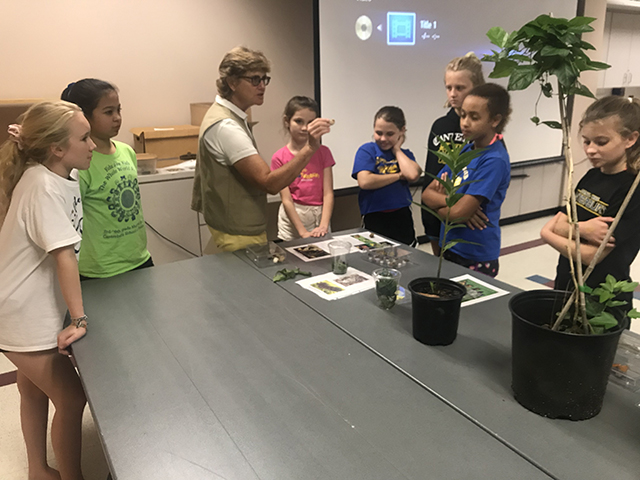 “Ok, you may go!” said the man. The guide took us to a set of doors.
“Be prepared, a blast of wind is going to blow at you when we enter. This is to keep the butterflies from escaping.” our guide explained. She opened the door, and as expected, a blast of warm wind gushed from the vents. As soon as we stepped in the Butterfly Rainforest, humid, warm air seemed to cling to my skin. Brightly colored plants and trees were everywhere, matching in with exotic butterflies flapping around the exhibit. A stone pathway led through the brightly colored, forest.
The guide led us through the pathway pointing at butterflies as we went. Butterflies of all colors and sizes flew around us. One butterfly was a bright blue on the inside of its wings but a rusty brown on the outside. Another was a simple lacey white, like a handmade handkerchief. We walked across the whole rainforest until we reached the exit. We stopped there and checked for any, ‘hitchhikers’. Finally, we explored the other exhibits. After having lunch, we hopped back on the bus and drove off to Blue Springs.