THERE'S NO PLACE LIKE CANTERBURY: A 50th ANNIVERSARY CELEBRATION

In 1968, Canterbury School of Florida was born. Its legacy is the product of passionate families of the St. Petersburg community over the past half-century. To commence a yearlong celebration, the Canterbury community came together on Friday, September 14 to rediscover its history and pay homage to its humble beginnings.

The party began on the Hough Campus for PK3 - grade 4 students on Snell Isle Boulevard with Head of School Mac Hall welcoming Mayor Rick Kriseman, Deputy Mayor and Canterbury Parent Kanika Tomalin, City Council Member and Canterbury Parent Brandi Gabbard, and Chamber of Commerce CEO and President Chris Steinocher. The large audience of students, current parents, and faculty/staff, past teachers, alumni, and alumni parents watched on while the students and teachers on the Knowlton Campus (grades 5-12) watched a live streaming of events and cheered along from their seats in the school's Dollinger theater. 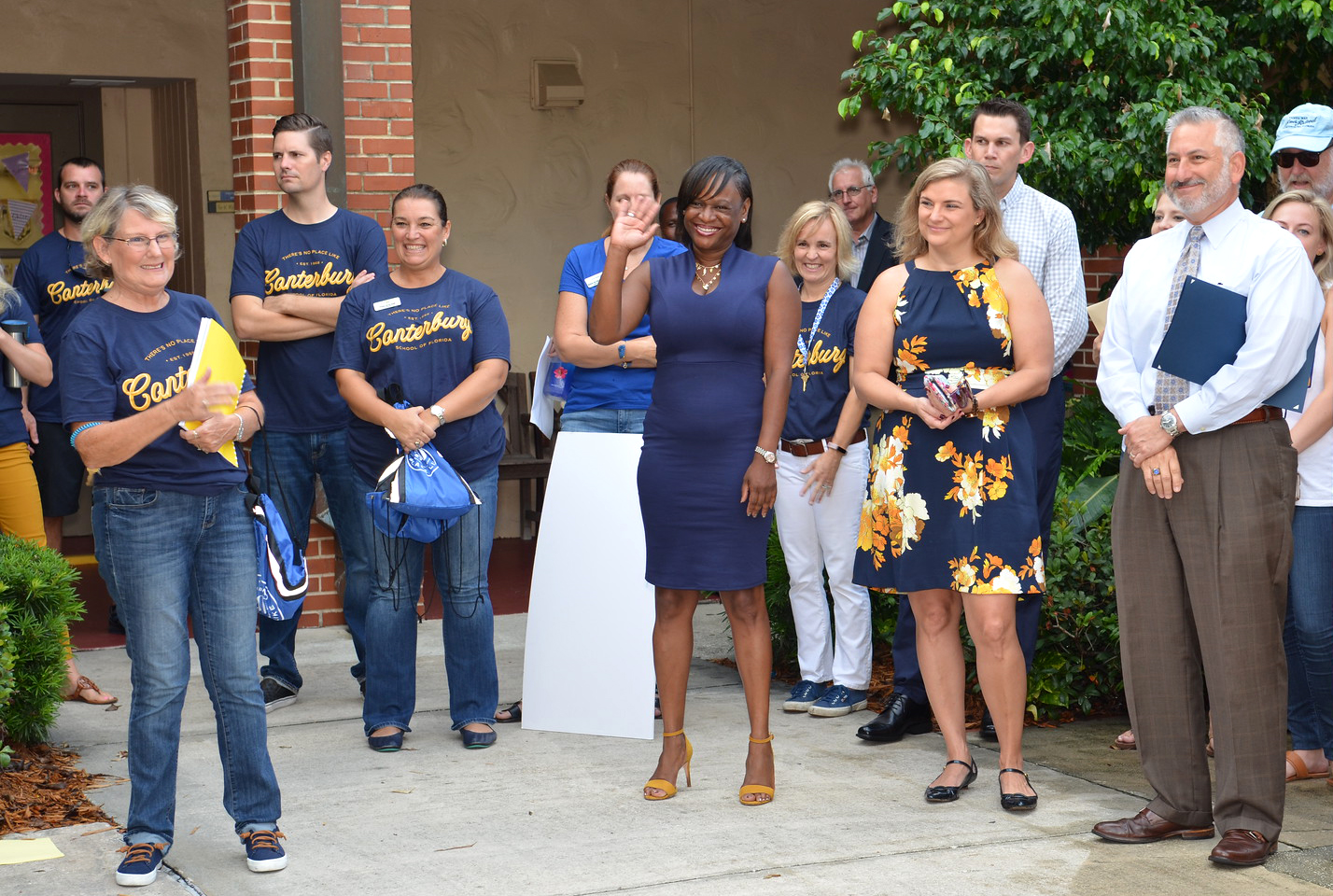 Mayor Kriseman presented an official proclamation stating that September 14, 2018 was Canterbury School of Florida day in the city of St. Pete! Playing to the younger audience, he joked with the children that there were a lot of 'whereas's' in the document and exaggerated the word each time it was mentioned, causing the children to smile and giggle.

Parents' Association President Jenna Worden-Brooks presented commemorative bricks for beloved faculty members that taught at Canterbury’s lower school for more than 10 years before retirement. We were fortunate to have many honorees in attendance to thank and recognize in person for their many years of service. In addition to acknowledging past teachers, the P.A. also bestowed a check to the school for Canterbury’s current teachers to support professional development in the amount of $5,050.50 - the profit from numerous uniform sales in honor of this golden anniversary. 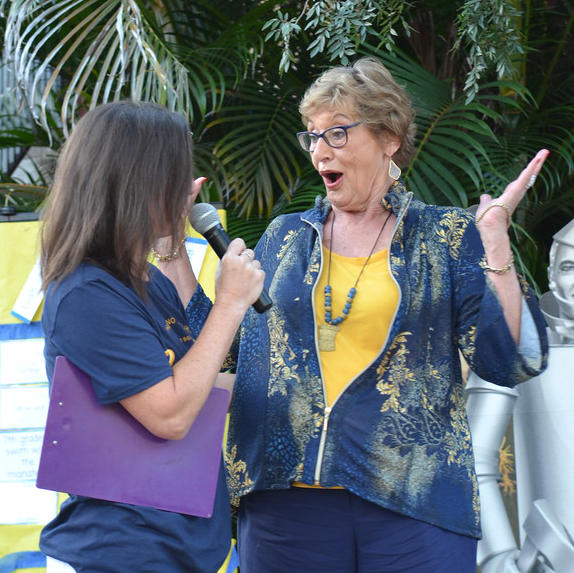 Twenty-two-year Canterbury veteran and Lower School Principal Claudine Cieutat announced that the highest honorary award on the Hough campus - the Principal's Award - will be renamed the "Jan Murray Principal's Award". The distinction is given to one student in recognition of character, integrity, and intellect in their last year on the Hough Campus (4th grade) before moving up to 5th grade on the Knowlton Campus. This came as quite a surprise to retired principal Jan Murray who returned for the day's festivities and stood by Ms. Cieutat’s side at the time of the announcement.

We were thrilled to have several Canterbury alumni attend and introduce themselves, citing their names and the years they spent at Canterbury. Some introduced their children whom now attend Canterbury as students establishing their own legacy through Canterbury. Alum Webb Bond, who graduated in 2004, noted that "today is a great day to remember just how much teachers can mean in your life." Looking around at his fellow alums and past teachers he continued, "I have a lot of good memories of a lot of people here today."

Our esteemed guests moved to a grassy part of the campus where a time capsule sealed 25 years ago was buried. Alumni took turns wielding a shovel to unearth the container of memories just beneath their feet. A snapped handle and a few sweaty brows later, the lid was removed, and it was discovered that the sealed container wasn't exactly water-tight. The contents of the receptacle were soaked in rainwater, but a few items survived due to enduring technology, like the laminating machine.

It started "What would you put in a time capsule that would stay buried for 25 years?" The contents left by each class are as follows:

Mrs. Bridge, who taught Pre-K in 1993-94, explained that her class wanted to leave their class mascot Douglas, a stuffed duck. Instead, they drew pictures of him for the capsule and included a book they wrote as a class. 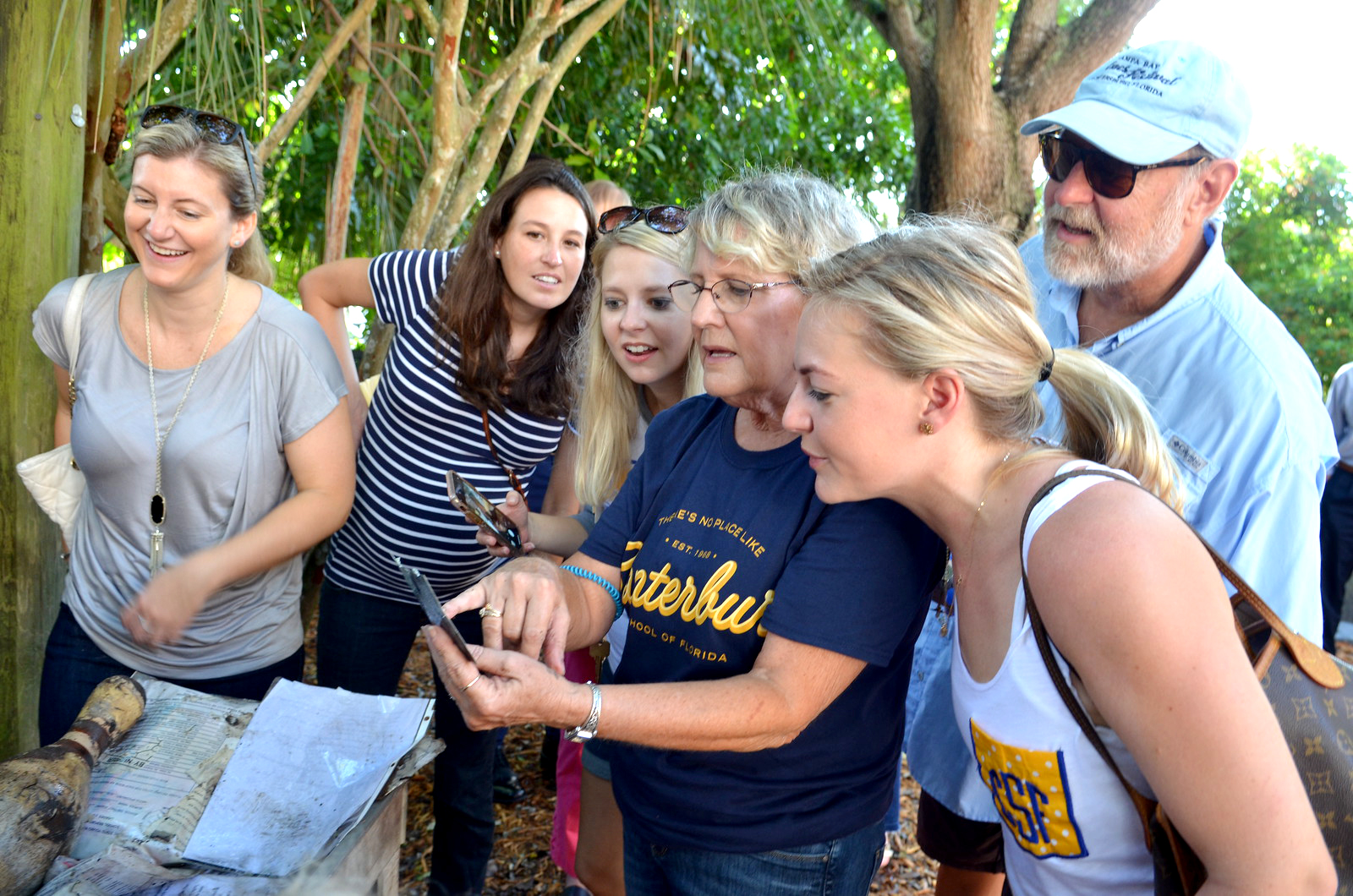 Mrs. Russell's class made a five-foot banner that wouldn't fit in the capsule. Being very effective problem-solvers, they took a picture of the class holding the banner to be placed in the capsule. Mrs. Moran's students enclosed an illustrated story they created as a class, "The Easter Bunny and the Giant."

Mrs. Lonquist’s and Mrs. Harrell's classes inserted stories they had written along with a stuffed bunny in a custom Canterbury uniform.

Mrs. Moulds’s and Mrs. Correa's classes included a handmade puzzle of Alaska to represent a month-long focus on the region.

Mrs. Hobby’s class included an old-fashioned hat to memorialize their studies of historical figures, such as Betsy Ross and a photo book of important buildings from their study of Washington, D.C.

Mrs. Ingram’s and Mrs. Daigle’s classes learned about the skeletal system and chose to include a skeleton figure and a piece of coquina from their field trip to St. Augustine that year. 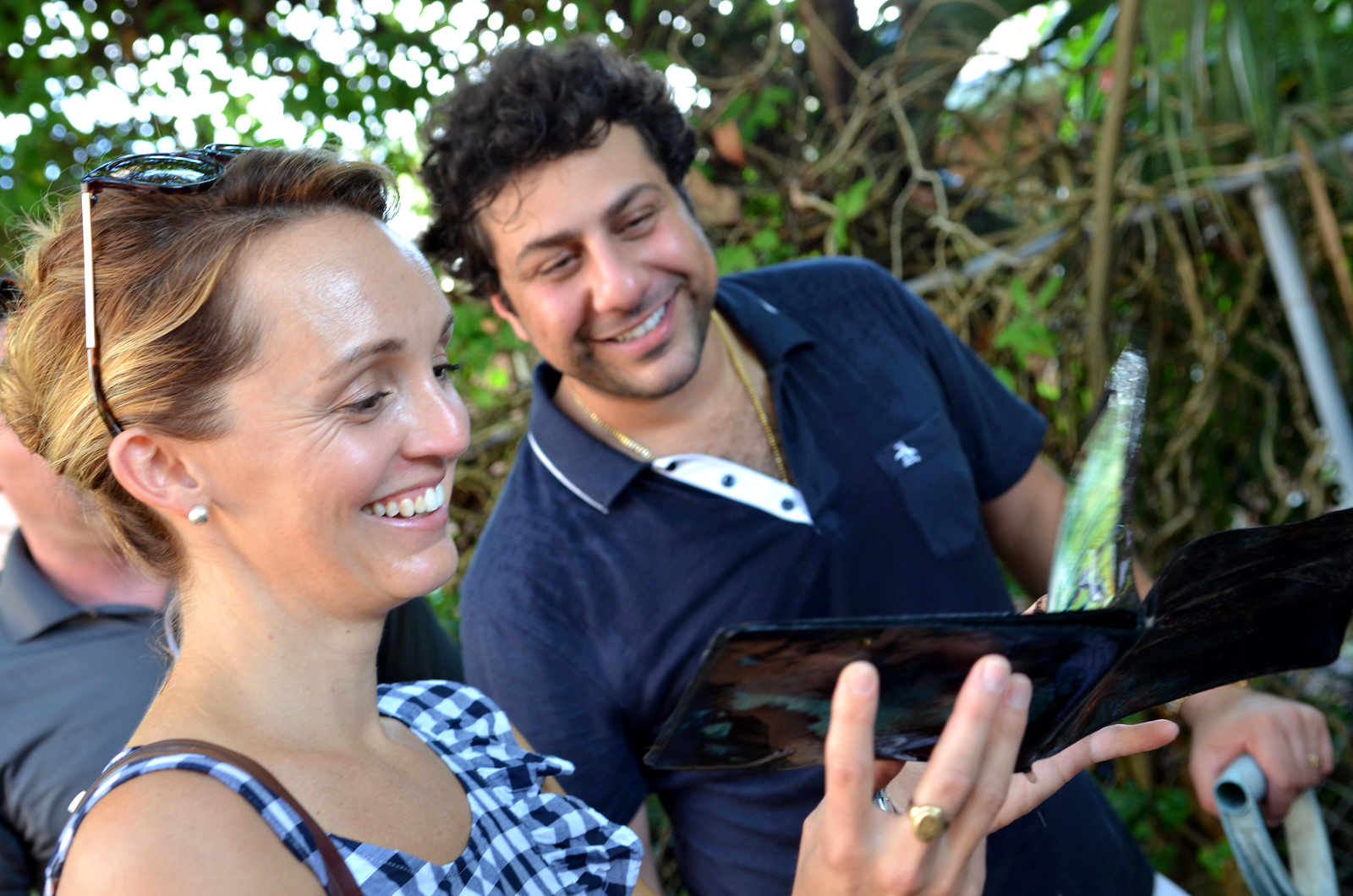 Mrs. Daigle’s and Mrs. Frame’s class chose to memorialize their 3-day camping trip by including the trip’s itinerary and collection of ghost stories written by students.

The school uniform may have garnered the biggest reaction from current students. They quickly recognized the familiar garb as the same pattern as the ones they wear today. Other items included was an invitation to that year’s Mardi Gras themed gala, a newspaper from the day the capsule was buried, a yearbook from 1993, and various photos taken through the school year.

Mrs. Johnson’s art class studied famous artists and created masterpieces in that style. Librarian, Mrs. Little included a Sunshine State Book and floppy disk (if you remember those) because that year the school raised enough money through the book fair to purchase a new computer and encyclopedias for each classroom. PE teacher Mrs. Donegan included a jump rope and a bowling pin to remind students of all the games they played together. The Parents' Association in 1993 included the Canterbury cookbook, published and sold as a fundraiser. 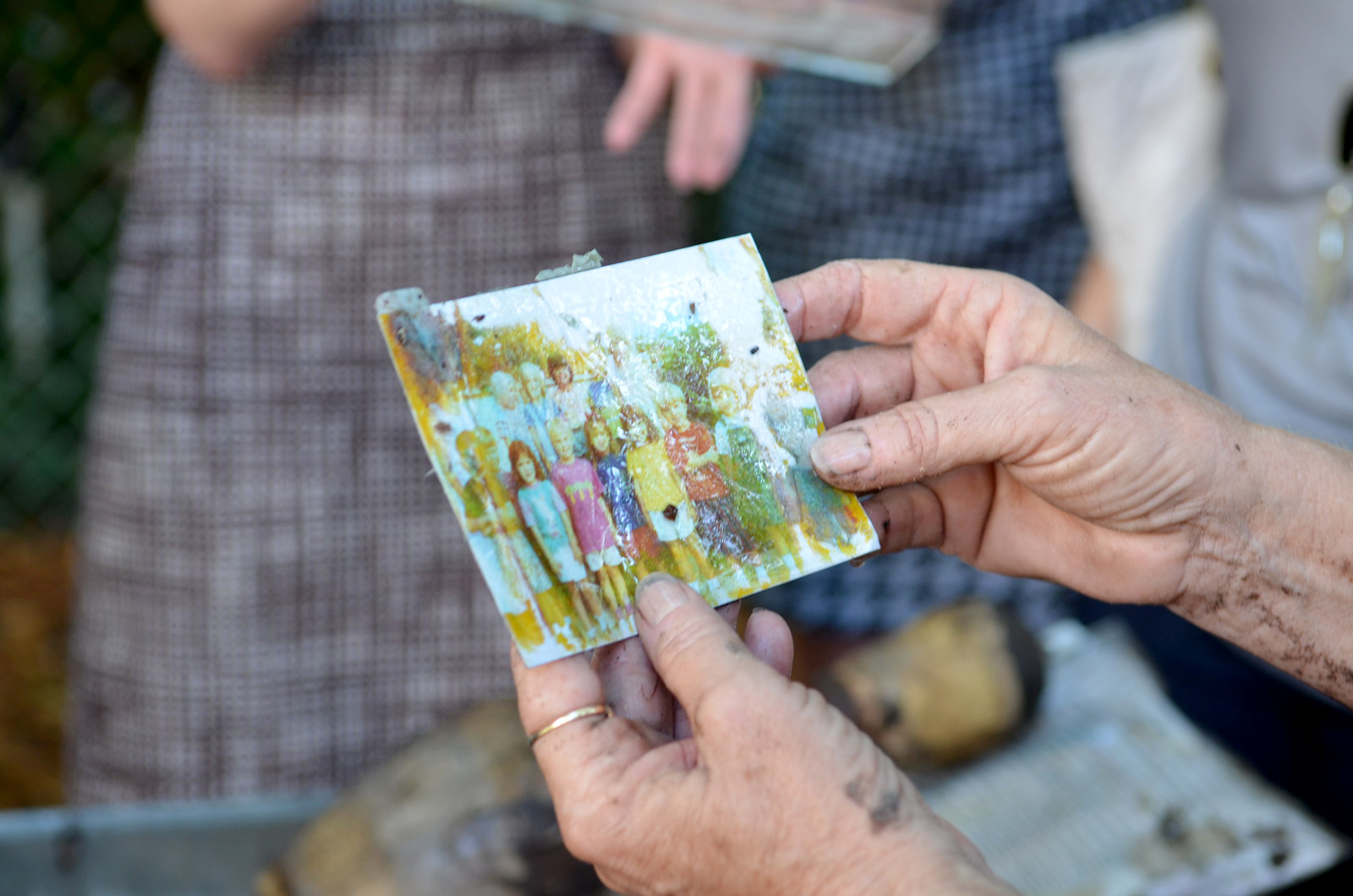 But wait! That’s not all.

Guests were invited to the Knowlton campus for a second presentation by the Parents' Association of commemorative bricks for retired teachers from the upper school. One-by-one returning teachers and Canterbury supporters introduced themselves to a new audience of current upper school students recalling some of their favorite memories and their years of service. 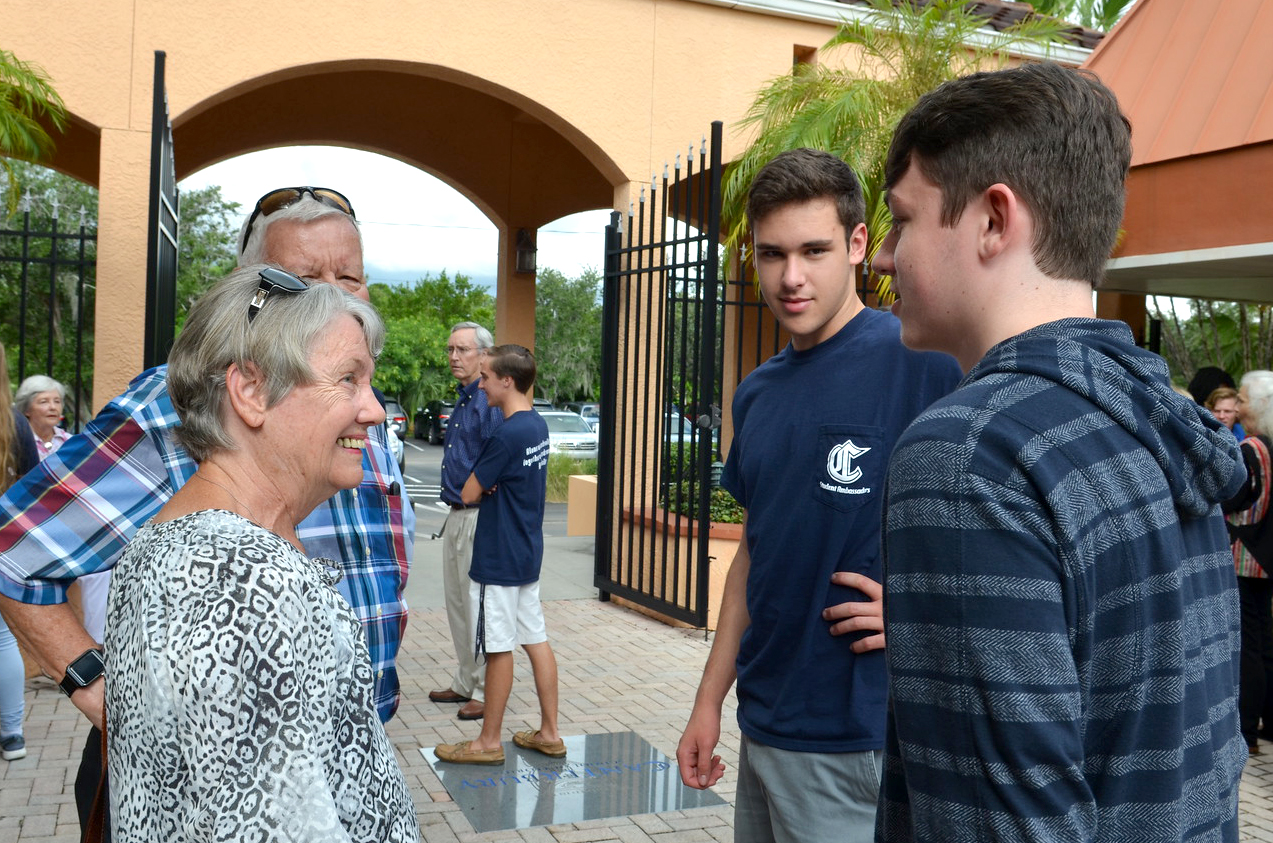 Ambassador students were eager to host our guests and show them Canterbury’s Knowlton Campus in its current state. Many noted the vast changes to the landscape since they visited last, but common ground was found between generations as they compared Canterbury’s past with its present.

Later in the day, the Hough Campus students were visited by Dorothy and her friends from Oz before enjoying a catered lunch (Ms. Patti's famous hot dogs) and getting their wiggles out with an epic dance party. The Knowlton Campus was filled with festival-style activities for current students that celebrated the unique experience offered to those fortunate enough to be a Canterbury student.  The activities featured signature programs like Marine Studies, Technology, the Arts, and International Studies.

Marine Science students addressed environmental concerns in a presentation about single-use plastics and microplastics found in waterways and marine ecosystems. They led an activity making reusable snack bags and decorated reusable tote bags that will be handed out in our community. 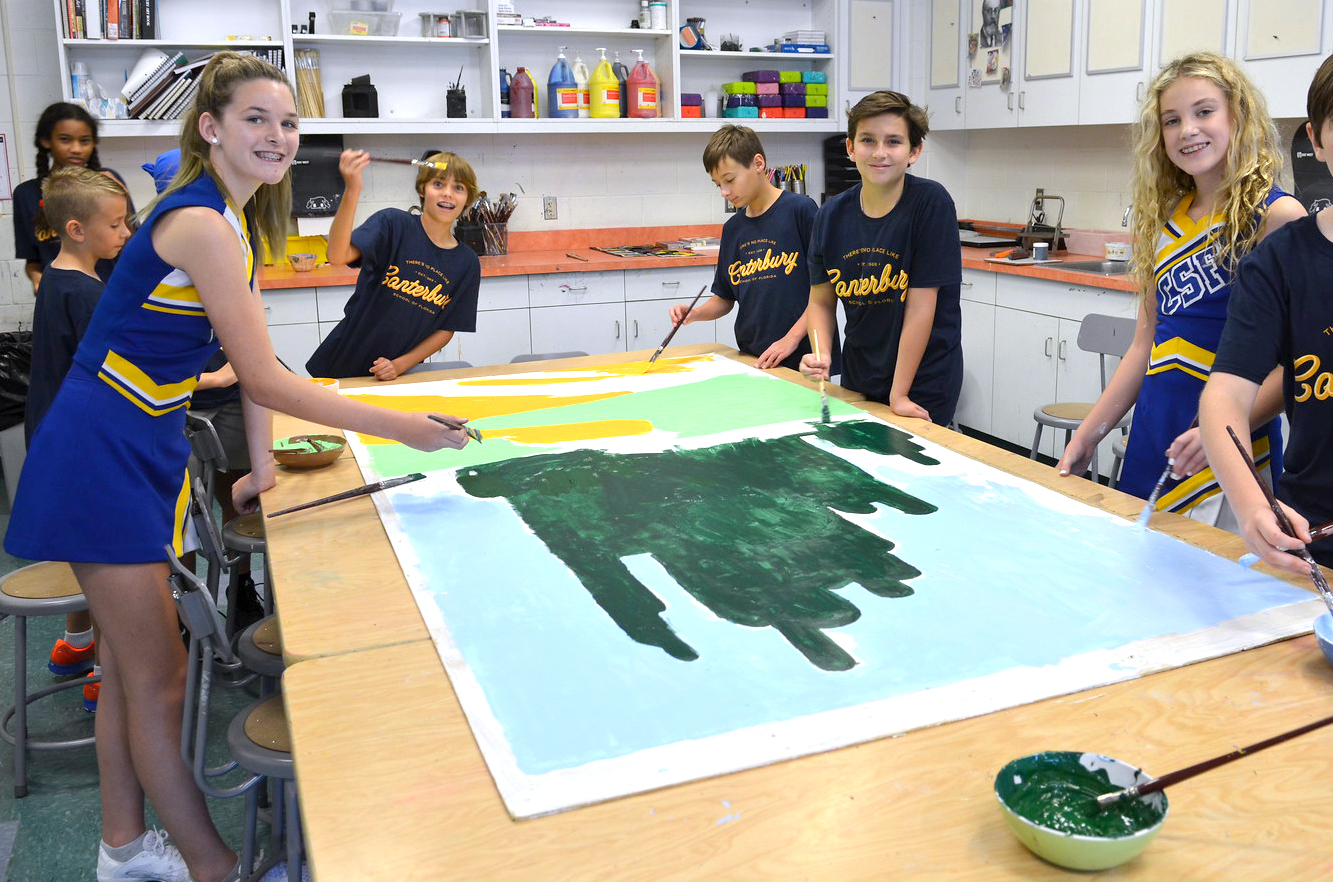 History: Students heard from Mr. Davis about the history of Canterbury’s arts program.

Collaboration: Then, they worked together to create a large painting of the Emerald City to celebrate this year’s special anniversary theme “There’s no place like Canterbury” that will be auctioned off at this year’s Gala.

Community: Each student painted a small square, pre-coded canvas tile that will be assembled to make an entire, cohesive image representing the individual and the community. 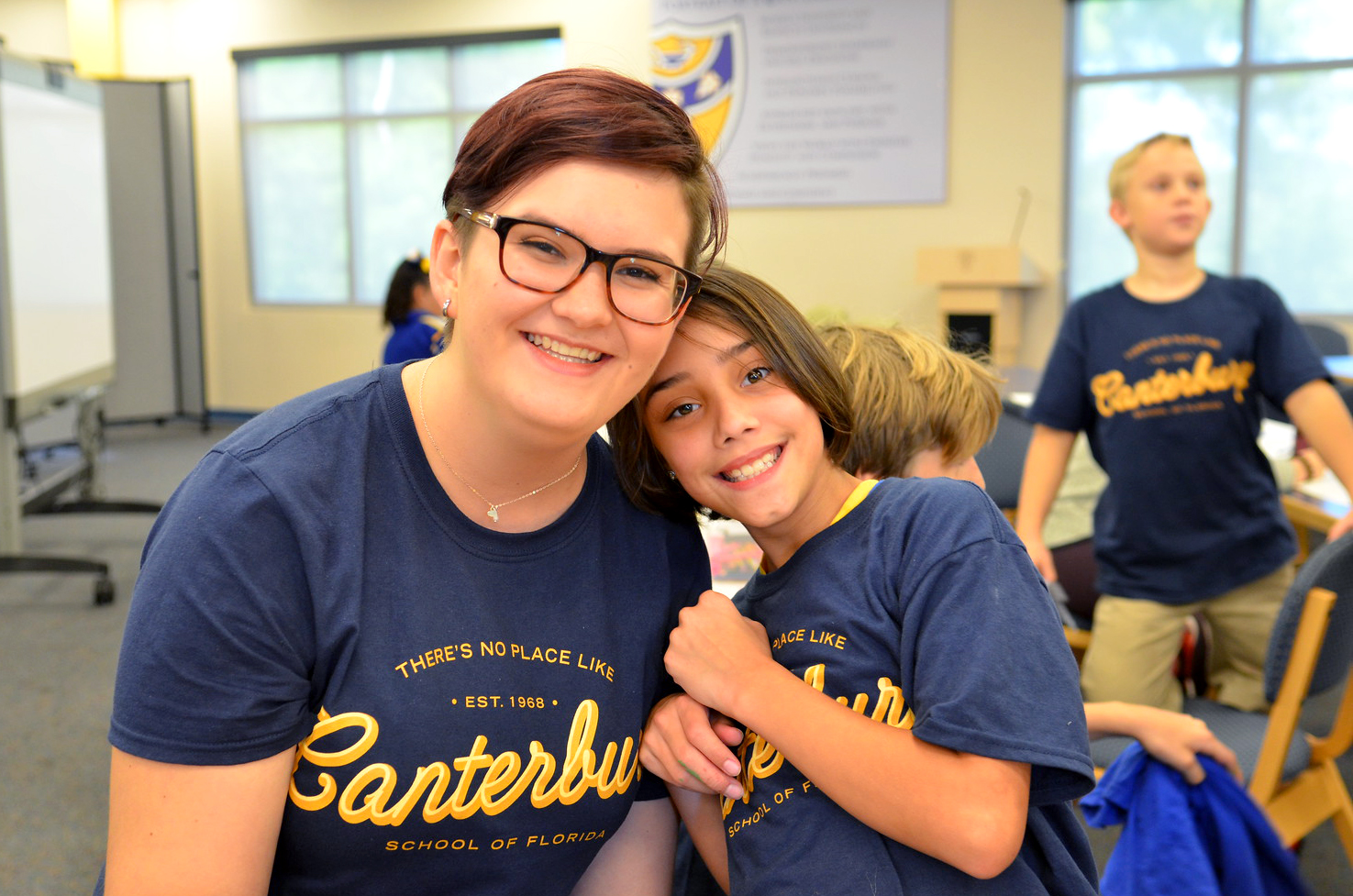 Innovation: The Technology Department arranged for maker-style activities for Big Buddies (seniors) and Little Buddies (5th graders) to create together, giving these newly-formed friendships the opportunity to bond through collaborative activities.

Global-Citizens: Celebrating cultures from all over the world, students learned birthday traditions from different cultures and danced to music from various genres.

We cannot leave out the core of Canterbury’s culture - character. We did not need a station for this, it is being taught and practiced through the very ritual of appreciating one’s past and showing gratitude for one's present. One of the hardest things to teach young people is the ability to receive and express gratitude from the generations that preceded them, so they become “responsible stewards of our world” - taken directly from Canterbury’s mission.

A favorite moment came from self-proclaimed human relic and retired Headmaster Jack Kenyon who retired twenty-one years ago. He and his wife currently live in a retirement home, he joked that they were able to attend the celebration because someone “left one of the doors open, and [they] escaped."

Appreciating the surrounding Knowlton Campus in its current state, Mr. Kenyon reflected on his years at Canterbury and acknowledged the appreciation he has for the "great group of people" that committed to seeing the school prosper. He declared, "I look at all you have today and all that you've accomplished, and I think the people I served with would readily agree that it was worth it."  He then called upon the attentive crowd of current students to "please take care of your school" and "always be a part of it." These words of reflection provide so much insight into the past of our school, but also the enduring nature and fortitude of its considerable community.

On behalf of the faculty and staff at Canterbury, our hope for this year-long celebration is to honor those who have paid into Canterbury’s legacy with their laboriously long hours and tireless dedication, to remember its history through the stories of those who wrote it, to celebrate its progress and set a course for its future, to recognize its impact on our community as a whole and our students as individuals, and to take stock in the moment and the opportunities we are afforded today because we know “there’s no place like Canterbury.”